**Mild spoilers – don’t read on if you’re not up to date with Westworld, or if you think Empire was a good thing**

All research aside, this week’s real achievement was that I finally made it to the end of the second seriesof HBO’s Westworld. As most of the internet has pointed out, series 2 has often felt like a long and turgid road and there’s really little for me to add to the many,
many opinions on the show’s variable quality.

What I do want to talk about though was the short but significant sequence that opened episode 3, ‘Virtù et Fortuna’, and revealed the nature of Park Six – a Colonial India-themed world referred to within the show as ‘The Raj’.

I’m now well underway with a new book project on the afterlife of the British Empire in historical literature and culture, so I’m somewhat attuned to spotting these neo-colonial fantasies in their various guises, from books through to beer labels, in British media of the last fifty years. Such a genre, known as the ‘Raj Revival’ thanks to Salman Rushdie, satisfies that powerful sense of national nostalgia for a time when Britain was a world power, and, as such, grew in correlation to the country’s real-world decline after the Second World War. 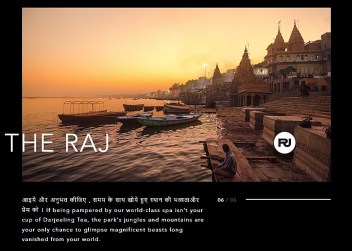 So I was (initially) surprised to find such a blatant example of Raj Revivalism here in Westworld, a programme with far more of an international audience.

Of course, tantalising us with glimpses of its expanded universe is deliberate, paving the way for broader narrative expansion in subsequent series and supported by the show’s creators hinting at further reveals to come. Although Westworld’s main narrative still focuses predominantly on its cowboy-themed original environment, this series has made efforts to take us beyond the confines of Westworld itself and show how Delos (the fictional company that owns the parks) caters for the varied tastes of its high-paying guests; for instance, the Edo-era Shōgunworld is said to offer a more extreme version of the core park experience, for the ‘true connoisseur of gore’.[1]

As such, I tried to imagine what ‘The Raj’ would be intended to do, and what desires it would be designed to meet. It didn’t take long to figure them out. As the show’s fictional website www.delosdestinations.com suggests, ‘The Raj’ is of course a playground for the rich, just as it ever was in reality for certain sections of Anglo-Indian society. In the brief on-screen time the show spends there, we get an insight into some of what ‘The Raj’ would offer, such as a facsimile of the gin & tonic-soaked gentility of early-twentieth-century Dehli’s finely-manicured lawns, and the opportunity for shikar (big game hunting) complete with robo-tigers, host elephants and a flurry of pith helmets, all intended to provide the mixture of technology, ‘provocative narrative’, and expectation the company promises. ‘The Raj’ thus presumably does for British guests what the mythology of the Old West does for American ones within the show’s narrative world. 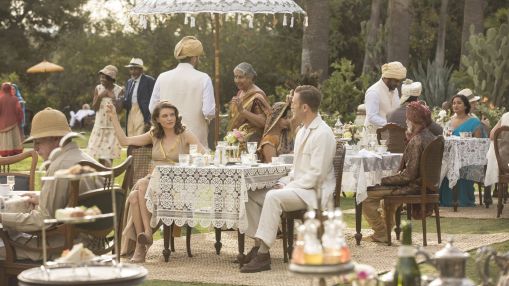 Following this line of thought, it would be reasonable to expect the park to pursue the other ‘core drives’ (to use one of the show’s own phrases) and enticements of Colonial-Indian life that exist in the British cultural representation of India; namely leisure, treasure and (sexual) pleasure.[2] One can imagine the Club standing in for Westworld’s saloon, the Lal Bazaar in place of its brothel and township, and the troublesome tribes of the North-Western Frontier its Ghost Nation Indians. It’s all too easy to imagine how the narratives of ‘The Raj’ would borrow from Anglo-Indian fiction too, offering storylines based on Kipling’s depiction of the Great Game of espionage and intrigue in Kim (1901), or the machinations of a nefarious Maharajah and a gang of Thugee straight out of Indiana Jones and the Temple of Doom (1984).[3] Even the narrative we do see – that of faithful bearers and placid servants turned violent – is resonant within the history of Anglo-Indian fiction, acknowledging the cultural obsession with the Indian Rebellion of 1857 and the number of fictional/factual texts that have sought to depict it.[4] One wonders how short would be the distance in ‘The Raj’ between sipping at a warm cup of Assam and manning the barricades at a mock-up of the Lucknow Residency?

Such possible narratives, and the idea that pervades ‘The Raj’, Westworld and the Delos Destinations parks (namely that existing in a historical era of your choice offers you the key to freedom and unlocking your true self), are ridden with assumptions and privileges of gender and race, themselves indicative of wider concerns within historical fiction and Anglo-Indian fiction. 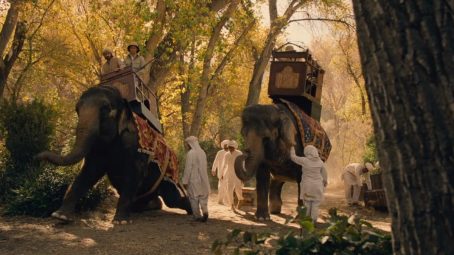 As others have pointed out, it is easy for white men to imagine themselves as central actors in other historical eras, but far less appealing for men and women of colour to do so, and this was the one part of ‘The Raj’ where the depiction failed to follow through on its own logic.[5] It has always been apparent that Westworld’s guests have a diversity problem – they are most often shown to be white and male – so it was strange to see apparently South Asian visitors (albeit relegated to the background in favour of the two white characters) amidst the depiction of ‘The Raj’; as Proma Khosla points out, it would be difficult to enjoy the supposed splendour of ‘The Raj’ knowing one’s ancestors would have been part of the servant class.[6]

Shying away from the inherent truth of ‘The Raj’ – that it is an affirmation of how colonial fictions so often indulge a tacit sense of white supremacy – doesn’t mean that Westworld can’t still make a point about contemporary cultural attitudes towards twentieth-century history, or speculate on how near-future society might approach the (seemingly long-distant) history of imperialism in its entertainment media. The showrunners’ decision to include ‘The Raj’ is of course fitting in terms of how it offers opportunity for the same sorts of abusive behaviours and fantasies guests indulge in elsewhere in the parks, and makes this point more clearly than some of the potential alternatives – the RomanWorld and MedievalWorld of the original Westworld feature film of 1973 speak to long-standing cultural obsessions with swords and sandals-epics, and were we to read Westworld in terms of gaming and ludology then a WWII-World would seem a no-brainer, but none of these quite represent the same sense of exploitative power relations relevant to the human-host relationship as ‘The Raj’ does. Given the current global context of resurgent nationalism as I have alluded to previously on this blog, ‘The Raj’ and the over-confident complacency with which some of its guests act (with deadly consequences) are likewise all too relevant.

It’s worth mentioning just to finish that HBO has form when it comes to depicting British India. They, in partnership with Goldcrest productions, were responsible for the adaptation of M.M. Kaye’s expansive, romantic epic The Far Pavilions (1978) first shown in Britain in 1984, which arguably laid the foundations for the kinds of ‘cinematic’ television series HBO are now associated with.[7] Their return to the genre, albeit obliquely, reassuringly inverts the suggestion of Delos Destinations’ own approach to colonial history, and suggests that there is scope to do so critically. Whilst I may not be tuning in for series 3 with quite so much alacrity, the prospect of a return to ‘The Raj’ might just convince me to take another look.

[2]The star of my previous blog, Charles Grey, writesof how his recruiting sergeant sells him on the Infantry in India on the basis that ‘the barber shaved one while he was asleep, a servant waited at the bedside with early morning tea and helped one on with his clothes while in intervals of loot collecting campaigns the soldier dallied with nut brown maids of the loveliest’; Soldiering In Victorian Days: a Memoir and Sketches(1941), British Library India Office Records, Mss Eur F391/2, 14.

[3]The case for Temple of Doom’s place within the Raj Revival is also strong, seeing as it is set in Mayapore in the district of Pankot; both fictional places that are the setting of Paul Scott’s Indian epic, The Raj Quartet(1966-75). Its plot too is evocative of Gunga Din(1939), itself based on Kipling’s poem of the same name.

[5]There is, of course, a history of ‘bodice rippers’ and romance novels that offer white women a place in historical narratives, but not with the agency of white men. Recent historical narratives involving black characters, such as Jesmyn Ward’s Sing ,Unburied, Sing (2017) or Yaa Gyasi’s Homegoing(2016) (or even classics of the genre such as Toni Morrison’s Beloved) are as much about how history offers trauma and the denial of agency to black characters, and not empowerment.