Anyone who has come across this blog before will know that I tend to look at examples of excessive drinking behaviours in much of my research. Given the nature of the records held in the India Office archive in the British Library, this is hardly surprising. The correspondence, reports and other papers or documents produced by the India Office typically concern themselves with solving problems – a great Imperial trait – and of course alcohol is often the source of such difficulties in the first place. However, drinking in the Raj was, as now, part and parcel of everyday life, routine even, especially whilst the military rationing system was in place, and not always the cause for concern the military moralists liked to make out.

The other problem with looking only at excess is that such a focus is too exclusive; I have considered the act of drinking, and its effects, but rarely its environs nor the activities that drinking accompanied and enabled. Of course, Victorian drinkers did more than simply sit in silence and gulp down their Chota Pegs, but very few of the official records give us insight into these kinds of details. Occasionally, we get suggestions of their conditions and amenities from a commissary or quartermaster’s report, but these are few and far between in the official papers, and leave out all the interesting questions – what did they talk about? What did they do to pass the time? How did these drinkers have fun?[1]

Instead, we must turn to less official material in order to fill in this detail.

Recently, I have been spending some very long days examining various unpublished memoirs held in the Manuscript Collections at the BL. One of these memoirs, Soldiering in Victorian Days, written in 1941 by Charles Grey, has preoccupied me more than most. It cannot be said that Grey’s book is one of the great memoirs of English letters; it lacks structure, veers off into tangents and anecdotes that jump forwards and backwards in time, he repeats himself (often), and ends not with any sense of closure but rather runs out of steam after describing a particularly drunken train journey during the First World War.

What Grey does give us though is detail. Running to nearly 600 pages of typescript, Grey’s sprawling memoir begins with an overview of his childhood as the son of a publican in

1870s Runnymede, and goes on to describe his enlistment, training, postings in Ireland, Malta, Singapore and finally India, where his military career ends in the first decade of the twentieth century. Grey is verbose, descriptive, and has an eye for detail – his portraits of places such as the pub in Kingston-on-Thames where he enlists in 1882, or the small villages of Ireland in which his regiment spent their free time whilst stationed there throughout the late 1880s are sharp and vivid, and, more importantly, told from a private soldier’s perspective; memoirs are so often written by officers and thus miss out on the whole world of the lower classes altogether, or cast them only as occasional interlopers into their otherwise luxurious and privileged existence.

Of most use to me has been Grey’s lengthy descriptions of how he and his barrack mates spent their free time. Along with the drinking (which was fairly chaste – Grey says stoppages meant ‘about another three pence left to get drunk on…and any man that could get drunk on three pints was a poor specimen’) there was also time for gaming. Grey describes how the most popular games were Shove Ha’penny, Tip It (also known as Up Jenkins) and Coddem (another form of guessing game, usually involving a coin), along with ‘plenty of singing’.

In terms of sport, unlike their officers who often play polo, tennis or hockey when not on duty, Grey and his mates would rather rest when they got the chance, possibly with a round of skittles if a lane was available.

More than gaming, however, their chief entertainment was found in the telling of tales and stories. Significantly, Grey was literate all his life, and indeed makes mention of quite how many recruits of his generation were compared to those men a decade or so older than them (illustrating, he believed, the effects of the 1870 Education Act). This brought with it professional advantages and opportunities for advancement in rank, but also greatly influenced the way they spent their free time. Grey and many of his troop are obsessed with stories, either in their telling or their reading, and drinking and storytelling go hand in hand – when they aren’t gaming, they are often swapping stories, yarns, or anecdotes about their lives, and Grey typically introduces his friends with mention of how good they are at two things: fighting and telling tales. He describes the regular routine after lights out; if a man had a story to tell he would call out ‘Boots’ and anyone who wished to hear it would reply ‘Spurs’. The subjects of these stories would vary from man to man, and often soldiers would get a reputation as tellers of a certain kind of story. Grey writes that ‘Blinky Brown specialised in wierd (sic) tales, ghosts, murders and executions all so gruesomely narrated that he kept us entranced from start to finish’, adding that Blinky must have had a marvellous memory as it turns out most were Edgar Allan Poe, Arabian Nights, or The Mysteries of Udolpho…

Such obsession with stories adds a layer of metanarrative and self-reflexivity to these accounts – they are all storytellers, with Grey telling their story as well as his own, and the pursuit of memoir-writing one of the hallmarks of colonial experience, productive of a culture of publication that sustained itself throughout British India and beyond.[2]Ironically enough, however, Grey states how neither him nor his friends actually cared for memoir and ignored them in favour of novels whenever they came across them in barrack reading rooms. Despite preferring fiction, Grey reserves especial disdain for that other famous storyteller of the Raj, Rudyard Kipling, and he is often incensed by Kipling’s characterisation of the Private Soldier, the Gentleman Ranker, or any other of the myriad distortions of Indian army life he is supposed to have committed to paper. 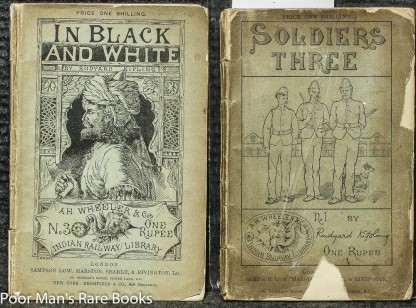 Grey sees Kipling and his writing as the product of, and for, a detached, complacent middle class, who wanted a neatly-packaged version of both the Raj and its soldier-protectors that excised the roughness and hardship of their lives. In this endeavour, even Grey concedes that Kipling’s genius was in his ability to give them what they wanted.

Ultimately, Grey’s writing might not have had the same popular appeal as Kipling, but offers us something no less important. Kipling may have been a great outside observer of colonial military life, but Grey saw it from the inside, and lived to tell the tale.

[1]Collection 236/96 Allegations of intemperance among British troops in India.