With the parties over and discarded Christmas trees already lining the streets, this week means back to work and back to reality for many (me included). Aside from struggling to find the motivation to go back to the office though, most will be fighting other battles too – thousands will sign up for Dry January, gyms across the country will likely be bursting at the seams with new members, and local parks will fill with lycra-clad visitors as people attempt to compensate for their Christmas excesses.

As has become clear over the course of this research project, worries over excess of various kinds constantly vexed the minds of the British in India, and not just after the holidays but all year round. Excessive behaviour could be profoundly dangerous, especially in the extreme heat of the summer; multiple sources attest to the ease with which people would succumb to heat apoplexy or heatstroke after drinking too much, or after exhausting themselves in work. Fearful of such consequences, some British residents went too far the other way, and a sedentary life supplemented by plentiful, cheap food meant that many swiftly put on weight. However, blaming the weather only went so far. Hotelier and socialite Harry Hobbs recorded a friend’s observation of India that: ‘people come out here and eat too much, drink too much, stay up too late at night, and then write Home to tell their friends that the climate has killed them’.[1]

Typically, advice on how to remain healthy and safeguard against the physical toll of colonial service would place great emphasis on diet. Military regulations, commercially published vade-mecums, tourist guides and books of tips for travellers all recommended what to eat, but would just as often address what not to eat as well, and whilst celebrity healthy-eating gurus like Joe Wicks act as though they are offering us something new, they are instead often more akin to their Victorian predecessors than they realise. 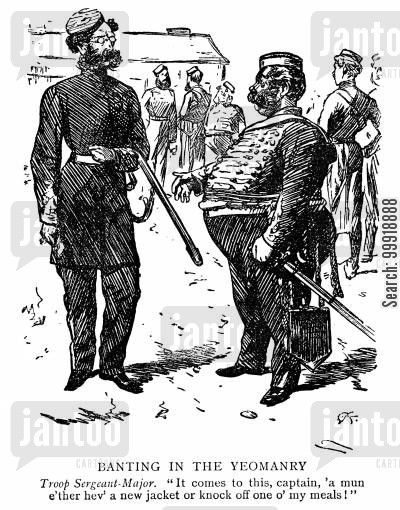 One such example is that of Major Joshua Duke. Duke arrived in India in the 1860s as a young officer in the Indian Medical Service, later rising to the rank of Surgeon-Major, before attempting to carve out a niche for himself as an Anglo-Indian dietary expert. Duke published his first book, Banting in India, in 1885, which (as its title suggests) applied the low-fat and low-carbohydrate diet developed in the 1860s by William Banting (an undertaker by trade, with no medical training) to the context and climate of India. For the most part, Duke’s advice seems straightforward – he suggested the avoidance of starchy and fatty foods in accordance with Bantingism, but was more often in favour of moderation in all things, as opposed to total abstinence. His remarks on diet, for instance, still speak warmly of the benefits of Burton Bitter as part of general diet (corresponding to a widespread contemporary belief in the effectiveness of beer on cases of indigestion), especially for the corpulent that had become accustomed to drinking regularly.

Similarly, in light of the fierce Indian weather, he still recommended butter and fats, mainly at breakfast, in order to avoid debility in cases of heavy exertion in the course of duty. In another publication, Queries at a Mess Table: What Shall I Eat? What Shall I Drink? (1908), Duke extolled the benefits of exercise, himself running 2 miles on a regular basis into his 60s and with an average time of 16-17 minutes. Duke suggests that the chief advantage of his method is that it is ‘soon over’, awards a sense of accomplishment, and allows one ‘to sit in an arm-chair for the rest of the day if so inclined’; a sentiment again echoed in today’s high-intensity, low-duration exercise plans such as Tabata or the Insanity Workout that cater for those lacking the time, or the motivation, for longer sessions.[2] Although, expressed as they were in the years following the Boer War and the context of poor physical performance by recruits there, Duke’s exhortations to the British soldier to fitness possessed a greater sense of urgency and importance. His remarks complement those of his contemporaries, including Commander in Chief in India General Sir O’Moore Creagh, who stated in a 1909 memorandum to troops that resisting excess and maintaining sound body and mind was the first responsibility of the British soldier.[3]

Duke had one other, slightly less orthodox, recommendation for those looking to shave off the pounds and stay healthy though, and one unlikely to receive professional backing today. In fine Victorian style, Duke was an advocate of new treatments and innovations, as well as his tried and tested methods, and writes enthusiastically of a relatively new drug called ‘Coca’, obtained from Bolivia or Peru. Citing reports from sources such as The Lancet, the Medical Times and Gazette and the British Medical Journal, Duke observes with excitement the thirst-quenching, appetite-supressing and energising properties of Coca, noting that one party of climbers made it to the top of Mont Blanc having drunk ‘no water, tea or coffee and but a limited amount of wine’ but each having chewed ‘80 grains of Coca’.[4] With such medical opinion and treatments on offer, one imagines the servants of Empire making short shrift of the Back to Work Blues…

[3] British Library, India Office Archives. IOR/L/MIL/7/13891: 1909-1911. Collection 315/76: ‘Alleged irregularities in proceedings of military authorities in India with a view to prevention of venereal disease: including letters on question of drink (alcohol), gambling and immorality among troops’.